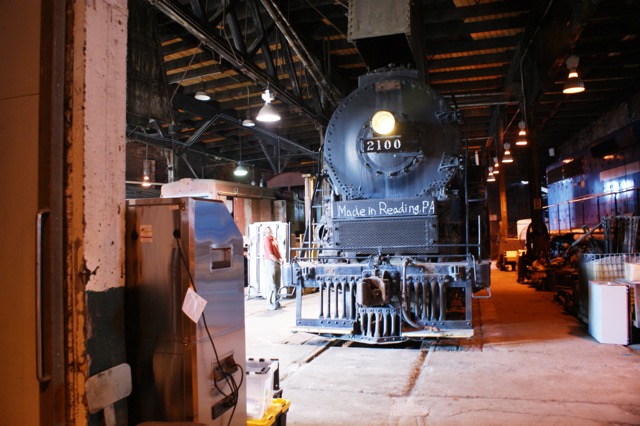 Following the cross-country relocation of a historic steam locomotive from Richland, Washington to Cleveland, Ohio, the American Steam Railroad Preservation Association (ASR) announces the official start of its capital campaign to rebuild Reading Company no. 2100.

“After conducting a detailed inspection of the engine, we’re ready to officially kick off the fundraising and restoration phase of Fire Up 2100,” explained Steven Harvey, President of ASR.

As part of Fire Up 2100, ASR has created the $21.00 Campaign, where supporters can commit $21.00 a month to the project for a year. Donors can sign up to contribute $21.00 or any reoccurring amount automatically online. Reoccurring donors are eligible for perks including merchandise, advance ticket sales and throttle time with 2100. For more information or to donate, visit www.fireup2100.org/donate.

The project is estimated to cost $700,000 with major phases dedicated to running gear repair ($270,000), appliance repairs ($50,000) and boiler work ($95,000), among others. Upon returning 2100 to operable status, ASR will employ the 2100 in passenger excursion and educational outreach programs, capitalizing on the worldwide popularity of railroad tourism and unique appeal of steam locomotives.

Since moving the 2100 to Ohio, and with no formal development program yet in place, ASR has already seen $10,000 in donations and interest from regional railroads and corporate donors, including 100 sustaining members donating $21.00 a month as of October.

Restoration work on 2100 will take place at the the Midwest Railway Preservation Society as part of an ongoing partnership with the organization.

Additional information, photos, and videos will also be released online at fireup2100.org and americansteamrailroad.org.