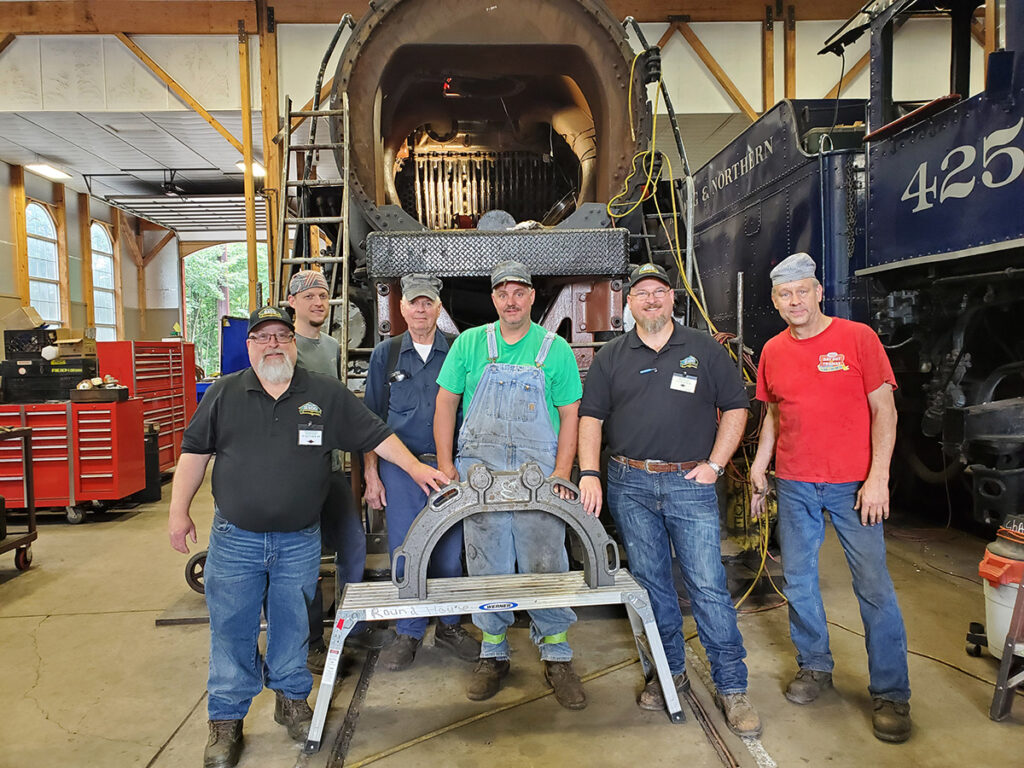 Board members of American Steam Railroad stand with the steam crew of the Reading Blue Mountain & Northern, after being presented with a firedoor casting by the steam crew at the Port Clinton, Penn shops last week. The group is standing in front of Reading T-1 2102, which is undergoing restoration.

ASR board members were invited to the RBM&N shops in Port Clinton, Pa. to inspect the progress on sister T-1 2102’s restoration. Upon arrival, the group was gifted with a brand-new fire door casting, which the railroad and its owner had given to help with the 2100 rebuild effort.

The 130-plus pound cast iron piece was made by a local foundry close to the RBM&N shops, and will greatly help ASR save money and resources, which will be dedicated to other areas of 2100’s restoration, along with helping convert the locomotive from oil back to coal firing.

“The Reading Blue Mountain and Northern believes in supporting groups like these, to continue to educate the public about railroads,” said Mike Fisher, general manager for RBM&N passenger operations.

The ASR group was given a detailed tour of the Port Clinton shops and restoration of 2102. The RBM&N steam staff answered many questions about work done on their locomotive and shared experiences that will help with 2100’s rebuild.

“We spent nearly the entire day with their crew,” said ASR president Steven Harvey. “It was a wonderful experience, and I came away with a strong sense of comradery between both Reading T-1 restoration projects.”

“It was a real pleasure to host several members of the 2100 restoration last week,” remarked Fisher. “We look forward to their success.”